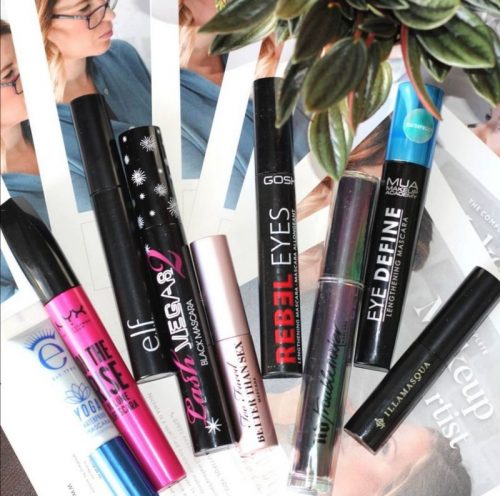 I have been searching for a great vegan mascara for soooooo long! SO LONG! When I first switched to a vegan and cruelty free makeup kit I quite enjoyed finding new bits to add to to it and there are so many great vegan makeup options out there, and more coming on to the market all the time.

So why is it so hard to get a decent vegan mascara?!

To be fair, I am quite a tough candidate for mascara. I have hooded eyes and oily eyelids (thanks for passing that on, Mum) which means that eyeshadows crease almost instantly unless I wear a good primer and it really doesn’t take long before dark patches start to transfer above and below my mascara covered lashes. But! I managed perfectly well with many non vegan mascara prior to the switch. So what is the issue?

I can take it no longer, it’s not even about my clients anymore, I want a great mascara for myself! You can call me selfish but if I can find a mascara that works well for me and my tiny, greasy excuse for eyes, then I know it should work fabulously on the majority of my clients too and finally make it into my professional kit.

I’ve decided to put vegan mascaras to the test.

That’s right vegan mascaras, I am coming for ya!

I have decided to find mascaras that claim to be vegan AND fabulous and put them through the toughest of tests; I am testing them on myself!
I’ve gathered mascaras from high street to high-end and I will wear each for a minimum of 8 hrs and record my findings. To make the test fair I will be wearing the same skincare and makeup each day and I will be using a clean disposable spoolie for each mascara, rather than the brush they come with. So it is all about the formula and how well it performs. Plain and simple.

If you want to see my findings and lots of close ups of my eye hoods, keep reading…

The cruelty free and vegan mascaras I purchased (yes, I purchased all of these with my own money and these are my own opinions) for the test are:

with Barry M’s Lash Vegas 2. I was actually very pleased with this budget friendly mascara. It applied well, it was quite light and very natural looking, so will not be great if you like drama in your lashes. It didn’t clump at all and I felt not irritation. I feel it would actually make a good everyday option for many people. However, on me there was definite smudging by the end of the day, which when I think about how little I feel went on to my lashes, is not great.

NYX On The Rise is at the mid point, price wise, coming in at £10. I also felt no irritation here but it was quite the opposite to the light feeling Barry M mascara. This was thick. Even during the application. By the end of the 8hrs? oh my! It was everywhere. A huge thumbs down from me. I definitely won’t be bothering again!

Moving on to E.L.F

I had quite high hopes for this one. It is only £4.50 and E.LF as a brand have some very good makeup options and are a fully cruelty free and vegan brand which makes things a whole lot easier when shopping; no label checking required, hooray! Plus it is waterproof, which is a hard find.
It was easy to apply, and gave good coverage. It did feel like it was drying quite quickly whilst I was still applying it, but if this means less chance of smudging, that’s fine by me. Again, no irritation at all.
After about an hour I noticed a patch of mascara on one eyelid but after removing it, there was no more major smudging for the rest of the day. By the end of the 8hrs there was a slight shadow under my eyes but the main issue was some flaking occuring, which was a bit of a disappointment. However, for £4.50 it’s a pretty decent mascara.

I am a huge fan of Illamasqua

and have used their products professionally for years, however I have not actually tried their mascaras, until now. The brand is cruelty free and they have a large range of vegan products. The Masquara in Raven applied well with no irritation and I loved the look, it definitely made my lashes look longer and there was no clumping. After the 8hrs? Unfortunately it didn’t hold the curl as much as I had hoped and there was some smudging and flaking. Urgh!

OK, Too Faced, Better than Sex mascara has

everywhere you look. It is the most expensive mascara in my trial but people rave about it. And I can see why, it applied lovely! My lashes looked longer and fuller, with no clumping. Gorgeous! But let me stop you right there. This mascara transferred so badly on to the lids/hoods of my eyes, more so than any of the other mascaras, and there was some flaking too. At this point, I am beginning to think my eyes hate me. This mascara works for almost the entire population, but not me! I officially have the hump. Moving quickly on…

I bought 2 mascaras from Eyeko, because, well they are pretty much famous in the makeup artist world and they have 2 vegan WATERPROOF mascaras. Finding a vegan waterproof mascara is a feat in itself so I got a bit excited and bought them both. I should also mention that these mascaras come in a squeezy tube, so it’s much easier to get out every last drop – already winning.
Firstly I tried the Eyeko Yoga mascara, it went on nicely, maybe a little bit of clumping but nothing to cry about (and best not to whilst applying mascara hey). It felt a bit sticky, or gloopy, which I put down to the wax they would have used to make it waterproof. Unfortunately after a very short time I could actually feel my lashes on one eye sticking to my lids and when I looked in a mirror, it was panda central!

I will defend it slightly by saying that this really only affected one eye, the other lasted much better as you can see in the pictures, which is strange, so I would perhaps give it another shot and try it out again. Maybe.

is the Beach Waterproof Mascara. It went on well and didn’t feel gloopy like the Yoga version, and my lashes looked much fuller. AND I am pleased to say there was very minimal smudging, like almost nothing, which on a regular person would probably be, nothing! Hooray! My only negative is that throughout the day my eyes started to feel quite dry. Not uncomfortable and not irritated but I definitely noticed a dry sensation that I hadn’t felt with any of the other mascaras. It is not enough to put me off, but worth a mention. Other than that, I loved this mascara and thank goodness! I was about to give up all hope! Could we finally have our winner folks?

Now I had heard and read lots of good things about this REBEL Eyes mascara from GOSH, on the vegan scene. I make it sound so cool don’t I? Do you wanna be in my gang? 🙂 I had actually been using this on myself a while back and found it to be great! However, the latest one I bought did not have the same results and for some reason started smudging so badly under my eyes. I spoke to a friend who I knew also used and loved this mascara and the same thing had happened to her. So perhaps they have changed their formula, which is pretty darn annoying. This was my go to mascara, the one, the champion of vegan mascaras and it was only £8.

Urban Decay Trouble Maker is another fairly pricey mascara and this one left me a little confused. Nowhere on the description online or on the packaging did I see that this mascara had fibres in it, but mine most definitely did. I found them during the application process to be pretty uncomfortable and just downright annoying. Once on though I didn’t notice them again and they didn’t flake away throughout the day. After the 8hrs there was some smudging both above and below my lashes and a little flaking, but for someone without greasy lids who doesn’t mind fibres, I think it’s a pretty good mascara.

MUA Makeup Academy Eye Define mascara is the cheapest of the bunch at only £3.00 and it claims to be WATERPROOF. This all sounds too good to be true. Annnnd it is. Much smudging paired with lots of flaking. No more to be said on that one.

Without doubt the Eyeko Beach Waterproof mascara is the strong winner here. No smudging, no flaking, looks great and lasts all day. It is waterproof and comes in a squeezy tube so not only will it mean I can use every drop of it, it is also much more sanitary if I were to add it to my kit. And

IT IS making it in to my kit!

100%. Since doing this experiment I have been using this mascara every day and I still love it. The dryness seems to have been a one off, or I have just become accustomed to it. It is a little harder to remove at the end of the day than some but this just enforces the fact that it really has staying power. One in my makeup bag, and one in the kit. Thank you Eyeko, you little beauty!

Things I have learnt during this process

Well one big one is I need to find a way to tame that rogue eyebrow hair on my left brow (right in the pics) but…I am so pleased that I have finally found a Great Vegan Mascara, I’m not going to lie, halfway through this test I was getting a little frustrated and thought I would finish without finding anything worthwhile. But we got there folks, we made it and it was totally worth it. Go treat yourself to Eyeko’s Beach waterproof mascara, you wont regret it!

If you’d like to be notified when a new post drops, or to receive the latest discounts and makeup & beauty tips, sign up to my newsletter.

One thought on “Great Vegan Mascara; Does it even exist?!”